Documentary Film: Wonder Women! The Untold Story of American Superheroines looks at how popular representations of powerful women often reflect society’s anxieties about women’s liberation. The film seeks to inspire women and girls to study the example set by heroic women and to recognize, develop, identify and harness their own innate strengths and powers.

Transmedia Project: Wonder City is a game designed to appeal to a broad audience, and will be suitable for tweens, teens and adults. Although the main character whose choices you guide will always be a superheroine, producers anticipate that male players will find it just as engaging.

Transmedia Project: America Revisited, The Black Panthers transmedia project, will create an opportunity for the public to contribute personal archival material and home videos related to the African-American experience to this unprecedented public media project. The project will leverage a centralized media uploader to enable maximum flexibility for uploading various forms of content. Users will upload video, audio, images, and documents to the website, or share content to their social networks, enabling word-of-mouth marketing that will help populate the transmedia platform with creative content and become a repository of archival material from viewer’s personal collections that can be incorporated into the production of the feature documentary film.

Documentary Film: Land of Opportunity, a feature length documentary, tracks the reconstruction of New Orleans post-Katrina and a diverse set of people: “What do we want our cities to look like, and what can we do to make that vision a reality?”

Transmedia Project: The Land of Opportunity Interactive Video Experience will use content from the Land of Opportunity documentary as a prototype for using interactive video to engage a variety of constituencies: urban equity advocates, educators, and community groups. The tool will integrate video with related multimedia content curated by strategic partners, that users can navigate, contribute, share and tailor in myriad ways. 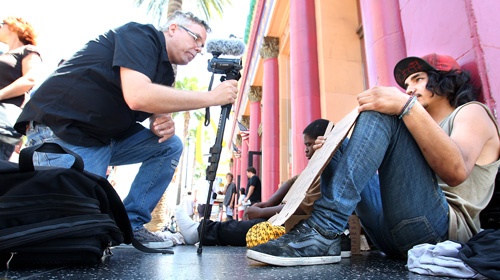 Documentary Film: @home is a journey into “new” American homelessness through the eyes of Mark Horvath. Once a homeless addict, and now devoted crusader for this cause, Mark uses raw interviews with the homeless and social media to raise awareness and smash stereotypes on invisiblepeople.tv. Mark also struggles to keep himself from sinking back into homelessness as he battles to pull America back from the cataclysmic spread of homelessness on our horizon. By giving voice to the “invisible people,” Mark has touched millions and by exposing what the failure of our common safety net means for us all he dares us to care.

Documentary Film: Mad!: Howard Jarvis and the Birth of the Tax Revolt

Jason Cohn is the Peabody-Award-winning director and producer of Eames: The Architect and the Painter. He follows up with a California-based story about bottom up government. The documentary unfolds as a tightly-drawn campaign narrative featuring a small cast of colorful characters, including the profane septuagenarian, Jarvis, and the young bachelor governor, Jerry Brown, who faced off in the most significant issue campaign in American direct democracy.

Documentary Film: At the heart of Immigrant Nation is a simple premise: nearly every person in the U.S. has an immigration journey, be it their own or the voyage of a relative in the past. As the hot-button topic of immigration divides communities across the country, our shared history has the potential to create commonality between recent immigrants and those whose families have lived in the U.S. for generations.

Transmedia Project: Immigrant Nation uses personal narratives to humanize divisive immigration issues in the U.S.  On Immigrant Nation’s interactive online platform, users can watch powerful short documentaries and then create their own immigration story. They can add their story to a data rich timeline of immigration arrivals to the U.S., tag their family members in their stories, find friends and relatives, and share the Immigrant Nation experience in their social networks.