For over 10 years, BAVC Media has offered high-quality audiovisual preservation services at a reduced rate, through an initiative called the Preservation Access Program. Thanks to grant funding from National Endowment of the Arts (NEA) and Andrew W. Mellon Foundation, this program gives individuals and small organizations the opportunity to preserve their tape-based media without breaking the bank. Oftentimes, these are the collections that we feel best represent our core mission: to amplify a diverse set of voices that might otherwise go unheard. In other words, these are the absolute best bits of our job – those trailblazing, vital documents that humble us as audiovisual preservationists. Suffice to say, we were thrilled to have Oakland’s own EastSide Arts Alliance entrust BAVC Preservation with a rich collection of tapes for the Preservation Access Program’s 2021 round.

EastSide Arts Alliance (ESAA) was founded in 1999 with the mission to unite art with activism in its vibrant home of East Oakland, California. ESAA creates opportunities for underserved communities, through education, recording and visual art facilities, a community archive and a multi-use theater venue, and even affordable housing units. ESAA has remained true to their vision for over 22 years, generating invaluable documentation of the art, activism, and bridge-building from Oakland and beyond. In their application to the Preservation Access Program, ESAA made it clear that the preservation of their tape-based media was quite literally a protection against cultural and political erasure. Meticulously labeled, each tape contains up to 60 minutes of one-of-a-kind conversations and performances: activists/authors Angela Davis and Amiri Baraka, Chicano artists and activists Malaquias Montoya and Carlos Montes, a jazz opera…we couldn’t wait to dive in. More importantly, we were eager to serve ESAA with BAVC Media’s acclaimed preservation prowess.

It’s a testament to the efficiency of technology, then, that such a remarkable and important collection arrived at BAVC Media in a package not much larger than a shoebox. Therein contained 30 mini digital video tapes, or DV tapes. Introduced in the mid-90’s, DV is among the “newest” or most recent tape-based formats, before recording was captured directly to a hard drive. DV is relatively free of physical degradation compared to other formats we handle – typically no mold or binder loss to treat, and tape damage is kept to a minimum thanks to its tidy housing. The playback machines are similarly user-friendly. While not immune to errors, they are rather spry next to much older U-matic or open reel video machines. Simple and straightforward, right?

But no one ever said our work was easy. We quickly found that a large number of these tapes suffered from myriad errors, and it became our priority to identify the source of these errors in order to resolve them. DV errors manifest themselves visually in fairly uniform ways, so unlike other formats, it may not be immediately clear what is causing the error. We set out to take inventory of which tapes presented errors, and then categorize tapes by error type. This way, we could potentially expedite the troubleshooting process by focusing on one error type at a time. Needless to say, we were slightly bemused when about half the collection appeared like this: 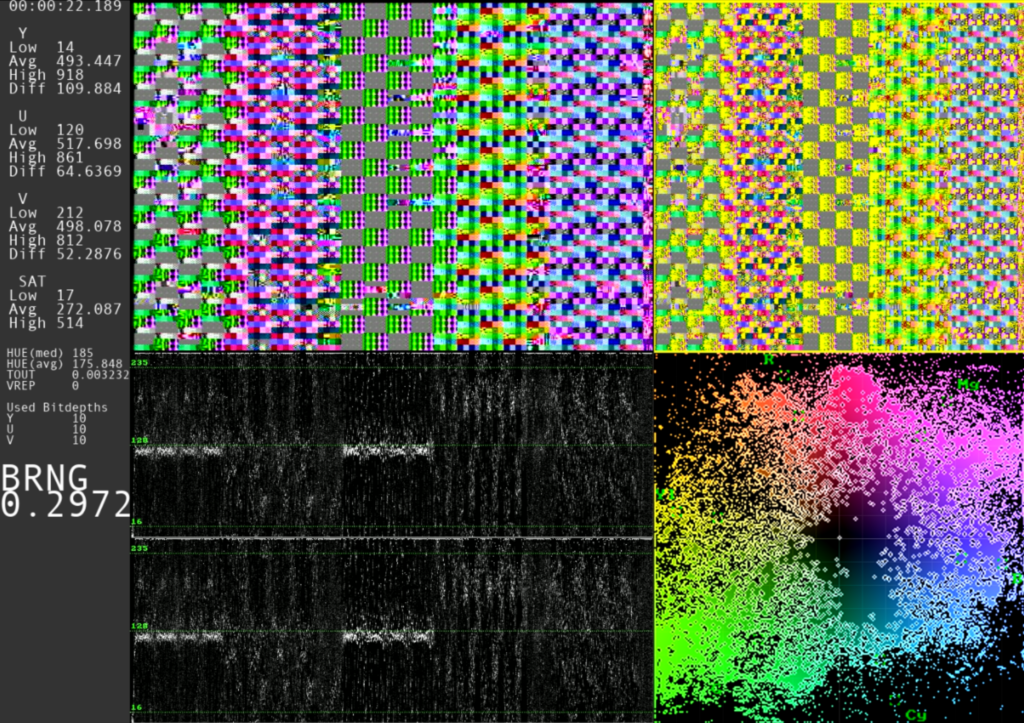 While eye catching, we were certain the EastSide collection didn’t include abstract video art. We jogged the tapes back and forth inside the playback deck to ensure no dust had built up, only to find these identical color patterns repeated over and over again. The next step was to manually clean the tape path inside the playback deck. Pictured below is the inside of a Sony DCR-1500A, one of our trusty DV capture decks. The column in the center is the head drum, no larger in diameter than a nickel: 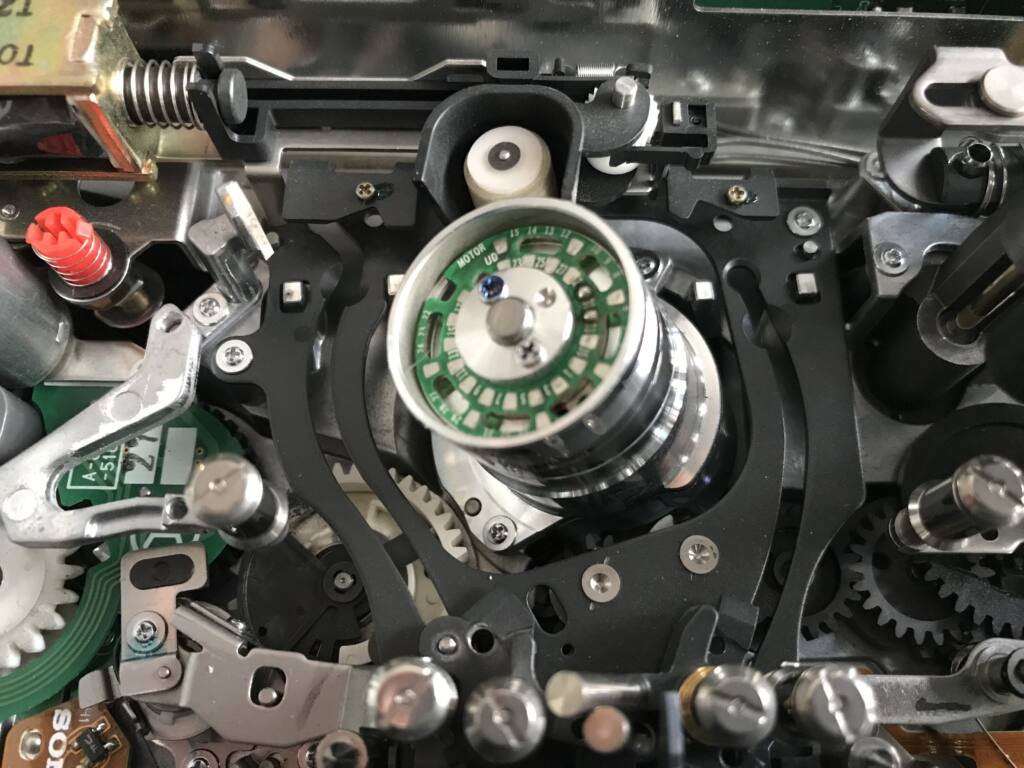 We thoroughly cleaned the tape path, but the errors remained unchanged.  Next step: try a different capture deck! After a couple attempts, we discovered that the content on this batch of tapes was viewable on the Sony HVR-M25U – an HDV (or high definition digital video) playback deck. Though the tape housing looks identical to standard DV tapes, HDV can only be played on an HDV deck. Problem solved – the content looked great and was successfully captured with minimal error. But we still had another handful of tapes that we knew weren’t HDV, yet presented persistent errors. In terms of affecting the image, errors commonly look like this: 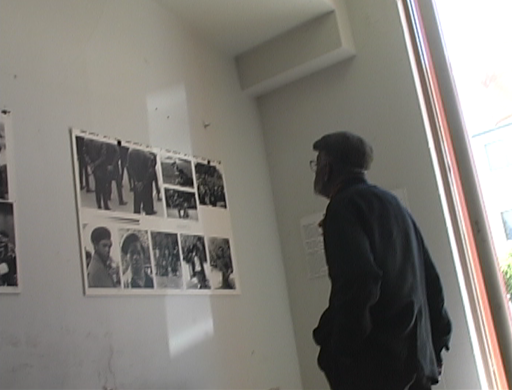 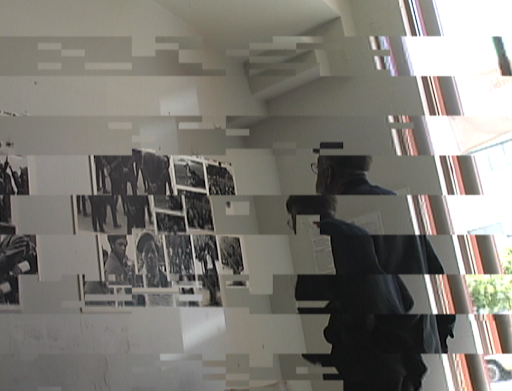 In common parlance, you really hate to see it. Furthermore, these tapes suffered from severe audio errors, which, for obvious reasons, cannot be illustrated in this article. Audio errors on DV sound bit-crushed and down-sampled, with a whole lot of aliasing going on. As mentioned above, we have a few models of standard DV playback decks to choose from. Along with a couple DSR-1500s, we also can fire up the slightly smaller, but no less effective, Sony DSR-45. After a thorough preemptive cleaning, we found that many of the video errors persisted, but the audio errors had mostly vanished. This is great news! But we need to know why a different deck might provide cleaner audio, and how we might be able to apply that lesson to improving the error-prone video content. Naturally, we turn to a true expert in the field – Dave Rice. A seasoned video archivist, Rice – along with Moving Image Preservation of Puget Sound (MIPoPS) – has developed an open-source digital video analysis tool called DVRescue. An ever-evolving project, DVRescue has the ability to identify and improve errors from a DV capture. It gives us the opportunity to look “under the hood” of a digital video file, to get a true understanding of what’s going on. I had the opportunity to speak with Rice via a transcontinental Zoom call, and he provided some key examples of how information stored on a DV tape is represented as a digital bit stream. The below image is a doozy, but is fairly easy to translate: 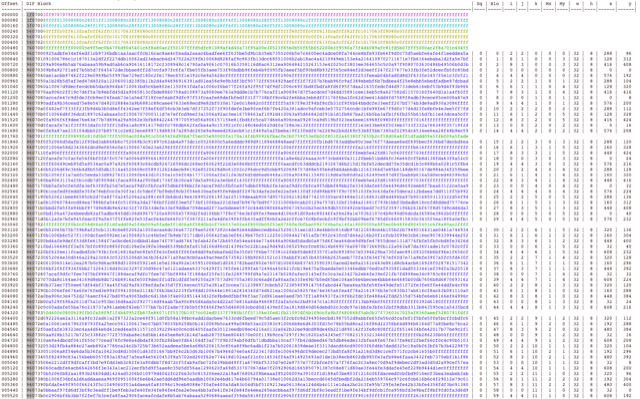 Seen here is a single frame of DV, represented as an 80 byte DIF block. Video data is in blue, audio data is green, the header is pink, timecode is cyan, and video metadata is yellow. The information on the right assigns width/height parameters of each DIF block, as well as x/y coordinates of where each DIF block is located within the frame. Given that digital video is encoded as a bit stream, errors that occur can be identified within each DIF block. This provides the opportunity for manipulation, and potential error-correction, that analog formats don’t have. For example, in the analog realm, any incidental errors that occur during the transfer can only be corrected by re-transferring the entire tape, and hoping the error doesn’t repeat itself. With DV, a single error or series of errors can be “re-tried” or captured in short segments. These recaptured short segments can then be combined with the original transfer (known as merging), and DVRescue will choose the error-free segments to replace the problem sections. Here’s an image that illustrates this concept: 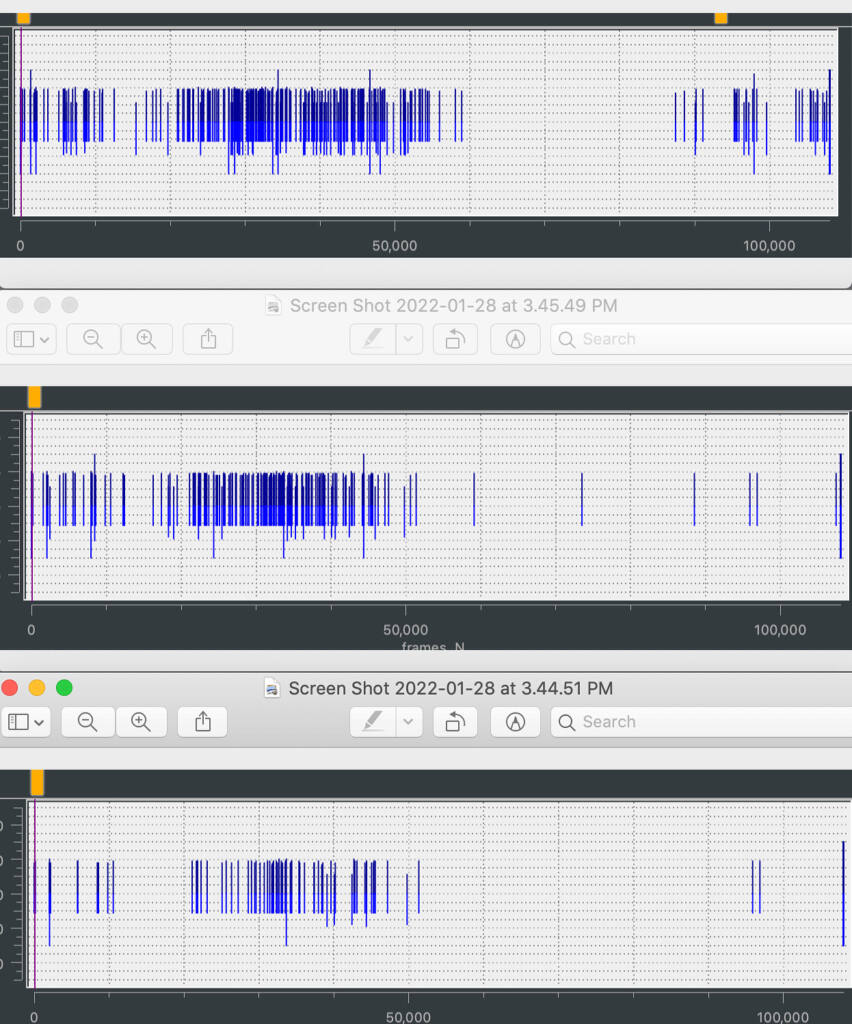 This is a series of three DVRescue outputs showing audio errors over time. Each blue line indicates a moment when the audio portion of a DIF block had data in it that DVRescue identifies as an error. The graph on top is the first capture, and a second capture of the same tape is seen just below it. The third graph on bottom is the output of the merging of the two captures above. Both the first and second graphs show severe audio errors, but they aren’t identical. Merging them corrects the severity of errors, resulting in a file that is better than either captures. The same principle applies to video errors. Because timecode is part of the bit stream, DVRescue can identify errors and replace them with frame precision. Of course, some tapes just present errors due to damage or degradation, and a merged file can only do so much.

We found that about a third of the ESAA collection suffered from some form of damage or degradation. What initially appeared to be a cut-and-dry quick turnaround, in time, took on a much more complicated scope of understanding the building blocks of DV, in order to deliver the best preservation files possible. Through troubleshooting these tapes, we were able to collaborate with Rice to improve DVRescue’s error detection and merging capabilities. It’s in this collaborative spirit – between activism to community archives, preservation technicians to technologists – that cultural memory thrives. The voices that have shaped EastSide Arts Alliance and the cultural identity of the East Bay for over 20 years have now contributed to BAVC’s core mission to amplify the community in which we exist. The relationships formed from these collaborations resonate far beyond the Bay Area, and inform the development of tools and the establishment of standards to continue the important work of preservation.